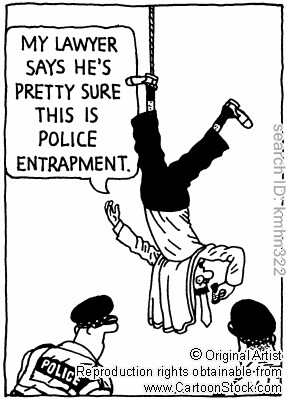 Entrapment occurs when (a) the authorities provide a person with an opportunity to commit an offence without acting on a reasonable suspicion that this person is already engaged in criminal activity or pursuant to a bona fide inquiry, and, (b) although having such a reasonable suspicion or acting in the course of a bona fide inquiry, they go beyond providing an opportunity and induce the commission of an offence. It is essential that the factors relied on by a court relate to the underlying reasons for the recognition of the doctrine in the first place.

The doctrine of entrapment is not dependant upon culpability and the focus, therefore, should not be on the effect of the police conduct on the accused’s state of mind. As far as possible, an objective assessment of the conduct of the police and their agents is required. The predisposition, or the past, present or suspected criminal activity of the accused, is relevant only as a part of the determination of whether the provision of an opportunity by the authorities to the accused to commit the offence was justifiable. Further, there must be sufficient connection between the accused’s past conduct and the provision of an opportunity, since otherwise the police suspicion will not be reasonable. While the accused’s predisposition is of some relevance, albeit not conclusive, in assessing initial approach by the police of a person with the offer of an opportunity to commit an offence, it is never relevant as regards whether they went beyond an offer, since that is to be assessed with regard to what the average non‑predisposed person would have done.

The absence of a reasonable suspicion or a bona fide inquiry is significant in assessing the conduct of the police because of the risk that the police will attract people otherwise without involvement in a crime and because it is not a proper use of the police power to randomly test the virtue of people. The presence of reasonable suspicion or the mere existence of a bona fide inquiry will, however, never justify entrapment techniques: the police may not go beyond providing an opportunity regardless of their perception of the accused’s character and regardless of the existence of an honest inquiry.

Entrapment is not a substantive or culpability‑based defence and the adoption of rules which historically, and by virtue of the Charter, conform to most substantive defences is neither necessary nor correct.

Objective entrapment involving police misconduct, and not the accused’s state of mind, is a question to be decided by the trial judge, and the proper remedy is a stay of proceedings.

The issue of entrapment should be decided by the trial judge, as opposed to jury, for policy reasons. A judge should consider the question from the perspective of a reasonable person, dispassionate and fully apprised of all the circumstances, and the reasonable person is usually the average person in the community but only when that community’s current mood is reasonable. The issue is maintaining respect for the values which, over the long term, hold the community together. One of those very fundamental values is the preservation of the purity of the administration of justice. A judge is particularly well suited to make this determination. Then, too, the determination of whether the admission of evidence obtained in violation of a Charter right would bring the administration of justice into disrepute is one which should be made by a trial judge. If one of the advantages of allowing claims of entrapment is the development of standards of conduct on the part of the state, it is essential that decisions on entrapment, and those allowing the claim especially, be carefully explained so as to provide future guidance; this is not something the jury process lends itself to.

Before a judge considers whether a stay of proceedings lies because of entrapment, it must be absolutely clear that the Crown has discharged its burden of proving beyond a reasonable doubt that the accused had committed all the essential elements of the offence. If this is not clear and there is a jury, the guilt or innocence of the accused must be determined apart from evidence which is relevant only to the issue of entrapment. This protects the right of an accused to an acquittal where the circumstances so warrant. If the jury decides the accused has committed all of the elements of the crime, it is then open to the judge to stay the proceedings because of entrapment by refusing to register a conviction. Because the guilt or innocence of the accused is not in issue at the time an entrapment claim is to be decided, the right of an accused to the benefit of a jury trial in s. 11(f) of the Charter is in no way infringed.

The requirement that the accused prove entrapment on a balance of probabilities is not inconsistent with the requirement that the Crown prove the guilt of the accused beyond a reasonable doubt. The guilt or innocence of the accused is not in issue. The accused has done nothing to warrant an acquittal; the Crown, however, has engaged in conduct, however, that disentitles it to a conviction. Requiring an accused to raise only a reasonable doubt is entirely inconsistent with a rule which permits a stay in only the “clearest of cases”. More fundamentally, the claim of entrapment is a very serious allegation against the state. To place a lighter onus on the accused would unnecessarily hamper state action against crime. The interests of the court, as guardian of the administration of justice, and the interests of society in the prevention and detection of crime can be best balanced if the accused is required to demonstrate by a preponderance of evidence that the prosecution is an abuse of process because of entrapment. This is consistent with the rules governing s. 24(2) applications where the general issue is similar to that raised in entrapment cases: would the administration of justice be brought into disrepute?

The defence of entrapment is to be recognized in only the “clearest of cases”: this description is preferable to the term “shocking and outrageous”. Once the accused has demonstrated that the strategy used by the police goes beyond acceptable limits, a judicial condonation of the prosecution would by definition offend the community. It is not necessary to go further and ask whether the demonstrated entrapment would “shock” the community, since the accused has already shown that the administration of justice has been brought into disrepute.

The state must be given substantial leeway with drug trafficking because the traditional devices of police investigation are not effective. The police or their agents must get involved and gain the trust and confidence of the people trafficking or supplying the drugs. The social consequences of this crime are enormous and harmful.